The state of Uttarakhand is divided into two regions – the Kumaon and the Garhwal. Kumaon region is bounded by Tibet in the north, Nepal in the east, Uttar Pradesh in the south and the Garhwal region in the west. The major towns of the Kumaon region include Haldwani, Nainital, Almora, Pantnagar, Mukteshwar and Ranikhet. Haldwani is considered as the gateway to Kumaon and Nainital is its administrative centre.

The word ‘Kumaon’ is derived from the word ‘Kurmanchal’, which is believed to be a tortoise incarnation of Lord Vishnu, according to the Hindu mythology. The localites, here, are known as Kumaoni and they communicate mostly through the Kumaoni language.

Kumaon is a maze of mountains, all being a part of the Great Himalayan Range. Hence, it has a lot to be explored when we talk about nature and adventures. Kumaon is the less accessible eastern part of the state. That’s why, it has a lot to offer which is yet not known to the travellers traveling to the other parts of the state. Here are a few places which add to the beauty of the Kumaon : 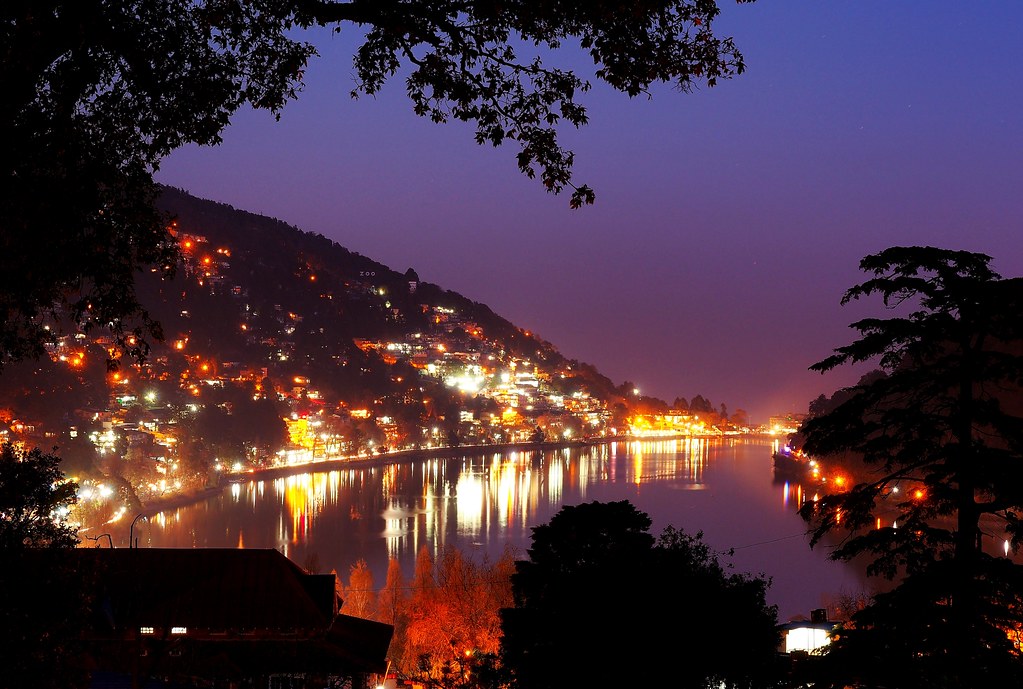 Nainital is the most popular hill station in the Kumaon region. The place is located at the Kumaon foothills of the outer Himalayas. The city of Nainital is set in a valley surrounded by hills and the Naini Lake lying in the bosom of the place. Hence, Nainital is known as the Lake District of Uttarakhand.

Boating in the green waters of the pear shaped Naini Lake will become one of those unforgettable moments of your life. The scenic views that one gets from the Naini Lake is worth capturing. You can go for a hike or a horseback ride to the highest peak surrounding the city, that is, the Naina Peak or the China Peak, which provides a splendid view of the Himalayas from the top of the peak. The visitors can also visit the Snow View Point which can be reached via an aerial lift. This site will give you a panoramic view of the Himalayas. There are a few food courts and also an amusement park near the point, where visitors can enjoy quality time with their friends and family.

Naina Devi Temple, Mukteshwar Temple, Hanuman Garhi Temple, Gurdwara Sri Singh Sabha and the Sattal Christian Ashram are some of the religious sites to be visited in Nainital. Not just the pilgrims, Nainital has also lured nature lovers from all across the country. Nainital High Altitude Zoo is a must visit place for animal lovers and nature seekers. Though small in area, the zoo comprises of a variety of species staying at such a high altitude, such as the Red Panda, the Bengal tiger, and a variety of bird species. If you are a zealous bird watcher, the Pangot and Kilbury Bird Sanctuary is a perfect destination for you. It is around 12km away from the main city, located at a more serene location which will surely take you away from the buzz of the city lights. Enjoying a cup of tea amidst the calmness of the Kilbury forest will rejuvenate your soul and it is a once-in-a-lifetime experience. The Eco Cave Gardens also provides an amazing thrill to the tourists.

Nainital has a lot to give to the shoppers as well. Tourists can roam around in the Mall Road which has a line of shops selling woody handicrafts and designed wax candles, which are primarily found in this district only. Visitors can also explore the Tibetan Market, here, for a good bargain. Evening time is most preferable for shopping. 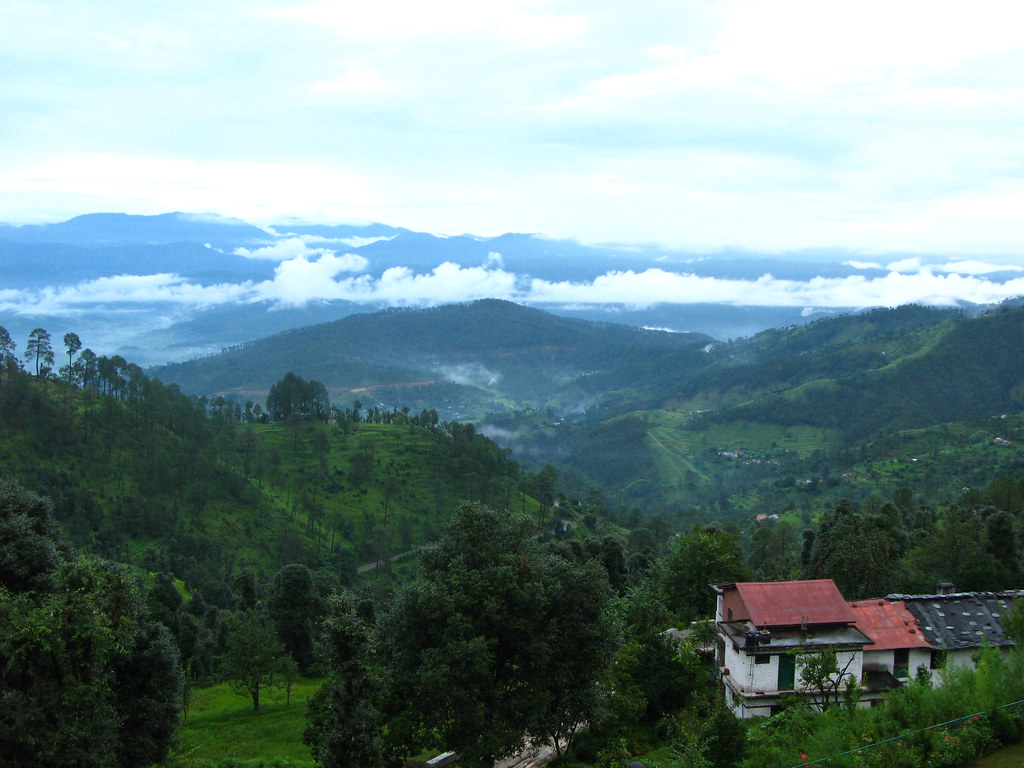 Located 53 km north of Almora, Kausani is a village situated in the Bageshwar district of Uttarakhand. The place was named as the ‘Switzerland of India’ by Mahatma Gandhi. This hill station is well known for its panoramic view of the three Himalayan peaks – Trisul, Nanda Devi and Panchachuli. The place is considered as a honeymooners’ delight with wonderful activities such as birding, photography and nature walks. During sunrise and sunset, the 300 km stretch of the Himalayas and the sky seems inseparable under the orange hue of the sun.

Tourists can visit the Anashakti Ashram, which is a place where Gandhi spent his days in Kausani. The place is good for people who seek for spirituality and calmness. Also, people can pay a visit to the Lakshmi Ashram, a centre run by Kumaoni women dedicated to social service.This ashram is located at a very quiet place, amidst dense pine forests, which is 1 km away from Kausani. Pant Museum is another tourist site, here. It is a museum displaying the daily-used articles, poetic drafts, letters and awards, all possessed by the famous Hindi poet, Sumitranandan Pant, who was born and raised in Kausani.

A lot of adventure stuffs are kept in hold at Kausani. The Rudradhari Falls and Caves require a 2 km trek through the uneven ground of the mountainous terrain. The water from the waterfall is icy cold to touch. The cave houses a natural Shivlinga formation. Kausani Tea Estate is a delight for tea tasters or tea lovers. The Kumaon Shawl Emporium is a hub for shoppers who are interested in paying a good deal for the woolen shawls, designed by the local weavers. The Baijnath Temple and Bageshwar are other places of interest nearby. 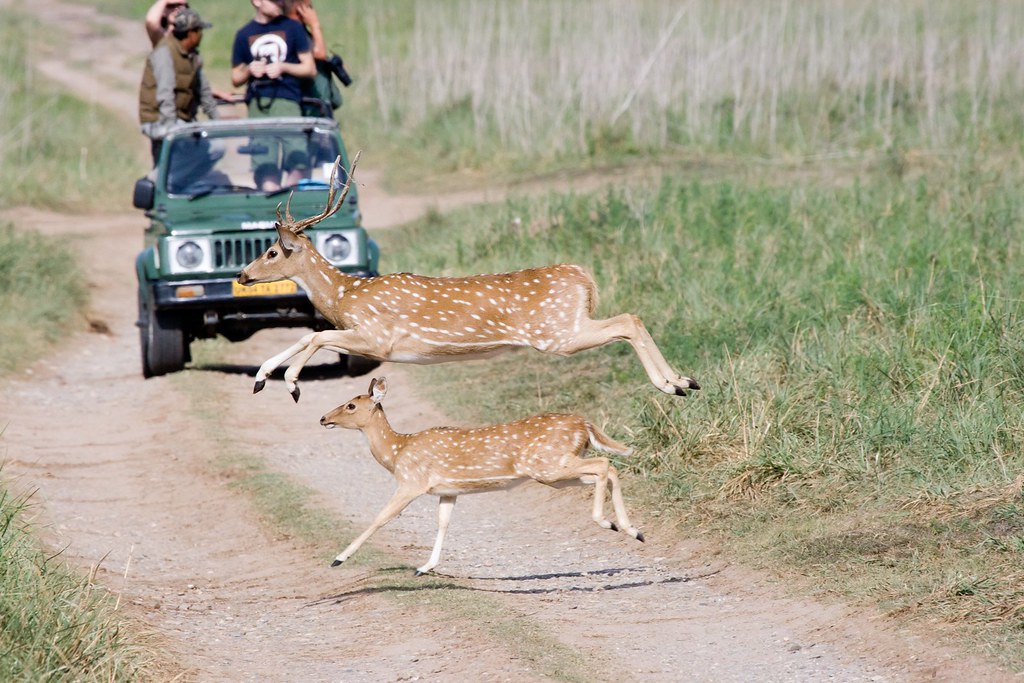 Situated at Ramnagar in the district of Nainital, the Jim Corbett National Park is a world famous tiger reserve. It is the oldest national park in India, that runs under the ‘Project Tiger’, an initiative to protect the endangered Bengal tigers. The park is an ecotourism destination with 488 different species of flora and a diverse fauna. The park has been a hub for tourists and wildlife lovers since long back. The area under the premises of the park include different terrains like hills, riverine belts, marshy areas, grasslands and a large lake.

But, the tourists are allowed only to some limited areas of this large tiger reserve. The park is a home for 586 species of resident and migratory birds, including the Red Jungle Fowl, Crested Serpent Eagle, Blossom-headed Parakeet, Domestic Fowl, Owl, Nightjar and many more. Dense woods and the Ramganga River form a perfect camouflage to the Bengal tigers. Other animals found here are Barking Deer, Sambhar, Chital, Sloth Bear, Indian Grey Mongoose, Indian Pangolins, Langoor, Rhesus Macaques, Indian Elephant, Gharial, etc. Dhikala zone is a well-known destination accessible to the visitors inside the park. There is a rest house in this zone from where the tourists can enjoy a spectacular view of the dense forests. Trip inside the Corbett park is possible via Jeep Safari, Canter Safari or Elephant Safari. The most preferable of them being the Jeep Safari.Jeeps can be rented for trips from Ramnagar. Walking Safaris are only allowed in the buffer zone areas.

Other attractions in and around the tiger reserve includes the Kalagarh Dam, which is located in the south-west of the sanctuary. This is one of the best destination for bird watchers in Corbett. The Corbett Falls is a waterfall situated 25 km from Ramnagar, on the Kaladhungi-Ramnagar highway. The dense forests around the waterfall give a peaceful atmosphere around it. Garjiya Devi Temple is a prominent temple here, located on the bank of River Kosi, nearby Garjiya Village at a distance of 14 km from Ramnagar. The best time to visit the park is from mid November to mid June. 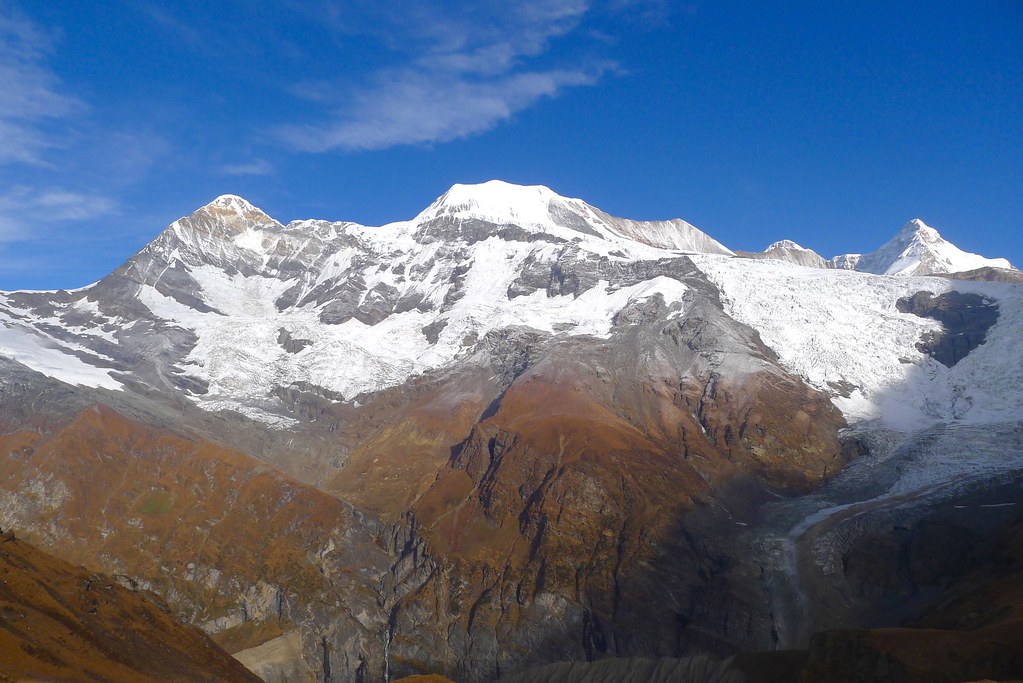 Pindari glacier is a big and steep glacier found in the upper regions of the Kumaon Himalayas. The glacier melts and flows to the south for a distance of about 3 km to form the Pindari River. The river then meets the Alaknanda at Karnaprayag in the Garhwal district. The glacier lies on the edge of Nanda Devi, the highest peak of India. Pindari is located at an altitude of 3660 metres above sea level.

It is one of the most easily accessible glaciers of the Himalayas. That makes it a centre for trekkers. As it is very easily accessible, even the amateur trekkers can go for it. The Pindari glacier trail provides a 90 km round-trip trek that takes almost 7 days for the climbers to complete it. The glacier has attracted several mountaineers and trekkers since the last century. The localites proudly refer to it as the ‘Soul of Kumaon’. Trekking, here, is of moderate level with less difficulties. Most suitable time for trekking here is between summers and early winters.

The glacier is also famous for other adventure sports like ice climbing and mountain biking. While visiting the Pindari glacier, the travelers can go for a visit to the Kafni glacier as well, located to the right of Pindari. The travelers can also explore the cultural life of Almora and Bageshwar, which are located near the glacier.

Almora is a cantonment town located on the southern edge of the Kumaon region of the Himalayas. The place is a hill station situated at an average elevation of 1,638 metres, with a year-round mild moderate climate. Surrounded by the pine forests,oak trees and the snow-capped peaks, the place gives a picturesque view to the travelers. The city of Almora is the cultural and commercial hub of Kumaon.

Almora has many famous temples. The most famous among them are the Chitai Golu Devta Temple and the Nanda Devi Temple. One can witness the beautiful views of sunrise and sunset at the Bright End Corner, which is 2 kms from the main city. Cycling and nature walks are some of the easy breezy ways to explore the beauty of Almora. Apart from these, you can go for adventure sports like rock climbing, Burma Bridge and Spider Web. Almora has unique handicrafts and delicious cuisines to offer. The delicacies famous here are the Bal Mithai and Singauri. The place has many shopping complexes which include the 200 year old Lala Bazaar.The popular handicrafts, here, include the Angora clothes, made from Angora rabbit’s fur, and the copper vessels.Aipan is a traditional art form of Kumaon which is only found at Almora. The artistic people would definitely love the art and handicrafts native to this city.

Tourists can visit here at any time of the year. But, if they wish to enjoy the snowfall, they must plan a trip between January to March.

Manoj Roy is marketing professional working with Majestic Journey Pvt Ltd. Apart from his challenging professional life he likes to adventure travel and explores wildlife of India to get close to nature. 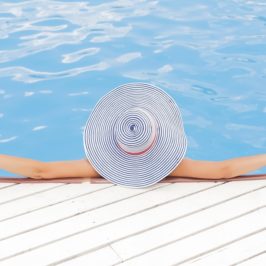 Time Away: The Mental and Emotional Benefits of Travel Do you experience a sense of... 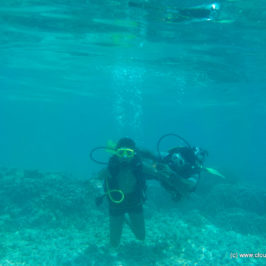 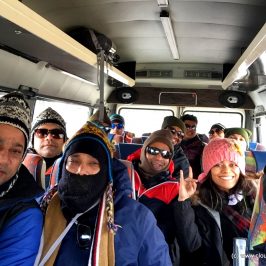 How to enjoy on a long Bus Journey Are you one of the travel freaks... 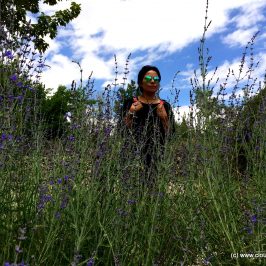 10 Awesome Destinations in India for Solo Female Travelers By Akansha Negi India has been... 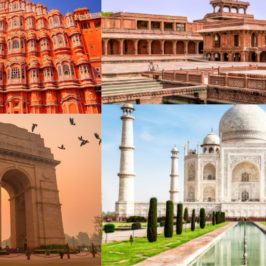 12 Best Places to Visit in India | Golden Triangle Tour If you are planning... 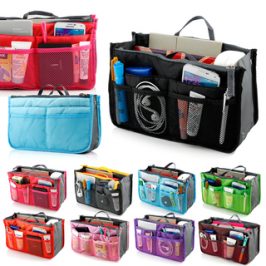